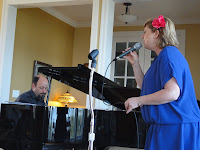 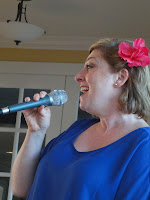 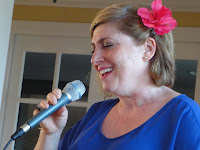 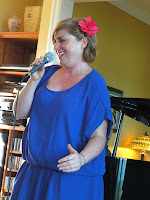 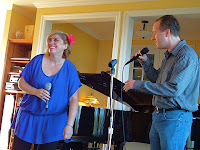 British Jazz vocalist, Anita Wardell, has loved singing jazz tunes since she was a teenager and has been performing since age 19. Her ease with and love of music comes forth in a joyful outpouring in performance and as an audience member, I couldn’t help but smile, along with her, feeling that joy during a performance I attended, as part of the jazzvox.com house concert series.

Singing with Seattle jazz pianist, Bill Anschell, at the grand piano, at Patty and Andy Carr’s lovely home on Camano Island, Wardell charmed her intimate, living room audience with a variety of jazz standards. Her voice is smooth, pleasing and expressive and her natural musicality, sense of time, rhythm, appealing, open style, vulnerability and comfortable relationship with the lyrics, are exactly right for the interpretation of jazz tunes. She has a flowing capacity for improvisational scat singing, as was evident in her upbeat performance of Gershwin’s, But Not For Me and during East of the Sun and when joined by jazzvox producer and Seattle area jazz vocalist, Nich Anderson, on a lively, vocally interactive version of Autumn Leaves.

Wardell, who spent a number of years living in Australia, performs internationally and regularly in London, England, where she now lives. She won the prestigious BBC Award for Best of Jazz, in 2006.

She incorporates Vocalese into a number of her songs. This is a jazz form in which the singer applies lyrics to original instrumentations or to what have been the specific instrumental solos that musicians have played during tunes on recordings. Jazz singers Lambert, Hendricks and Ross, Manhattan Transfer and Kurt Elling, are probably the most well known for their performance of Vocalese. Wardell sang vocalese versions of the solos of Johnny Hodges and Ben Webster on Duke Ellington’s catchy, In a Mellow Tone and a fast and complex vocalese of a Stan Getz solo on Don’t Get Scared.

The program included It Might as Well be Spring, from Rodgers and Hammerstein’s musical, State Fair; Reaching for the Moon, a song originally performed by both Carmen McCrea and Billie Holliday; Flor de Lis, a Brazilian tune, in Portuguese; Willow Weep for Me and a great, ballad version of The Meaning of the Blues.

The highlight of Anita Wardell’s performance was her beautiful, dreamy, slow version of Duke Ellington’s, In My Solitude, with an especially lovely solo by Bill Anschell on the piano. It was probably one of the best interpretations of that song that I have ever heard. Wardell really tapped into the meaning and simple, subtle beauty of the composition.

The Jazzvox jazz vocalist house concert series continues through the year in homes in Auburn, WA. and Camano Island, WA. The homes accommodate an intimate audience of about thirty each. Producer/vocalist Nich Anderson started this project to bring some of his favorite jazz vocalists to perform in the Seattle area and has chosen outlying venues to make it easier to reach and encourage jazz audiences in their own towns and who may live far enough out to not be able to regularly attend concerts in Seattle. Excellent chef, Patty Carr, prepares delicious, homemade food and it is just like being at a wonderful party. For vocal jazz lovers it is a really great find and a wonderful value at a thirty-dollar donation for a concert, with dinner included. At Wardell’s Camano concert, Carr prepared fresh mushroom soup and chicken meatball soup with orzo, as well as a rich, pumpkin cheesecake and ginger, lemon cream cookies.

Upcoming Jazzvox concerts include Roseanna Vitro, with Mark Soskin, piano on November 12th and 13th, 2010 and Kate McGarry, one of my favorites, with her husband, Keith Ganz, on guitar, on December 10th and 11th, 2010. To learn more about Jazzvox concerts and to hear musical samples of the artists, visit www.jazzvox.com. To learn more about vocalist, Anita Wardell and her six available CD’s visit www.anitawardell.com.

On the way home from the Camano Island concert, we stopped in Stanwood, WA, to meet and visit with Ed Beeson, in his new restaurant/cafe/performance venue, the Blackbird Bakery Café. Beeson has had an impressive and seasoned career in performance production, having owned the popular, Backstage, in the Ballard neighborhood of Seattle, for a number of years and also was in charge of performance programming for the Bumbershoot Festival for some time. He plans to present an exciting variety of performance, arts and other community events at the Blackbird. Keep your eyes open for what’s going on at this great new venue. Visit www.blackbirdbakerycafe.com
Posted by www.artsandculturescene.com at 10:04 AM