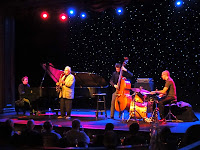 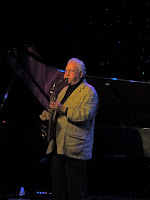 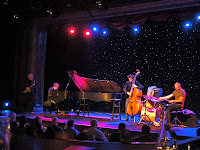 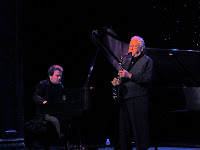 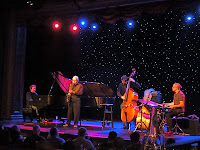 The Lee Konitz New Quartet at the Triple Door

Legendary jazz alto saxophonist/composer, Lee Konitz, brought his New Quartet to Seattle for one show on October 5th, presented by Earshot Jazz, at the Triple Door.

Konitz, who turned 83 on October 13th, was joined by young musicians Florian Weber, piano, Jeff Denson, bass and Ziv Ravitz, drums, the three of whom have been playing together as the trio, Minsarah, (Prism, in Hebrew), since 2000, when they met during their studies at the Berklee College of Music, in Boston.

For the serious and discerning jazz listener, this concert was the ultimate in satisfaction. The four musicians were intense and concentrated in listening to each other, leaving a lot of space for natural and organically flowing musical exploration and took familiar jazz standards and deconstructed and reconstructed them, with integrity and musical intelligence, intuitively creating something new and refreshing, while maintaining the melodic structures of the original tunes. It sounded like they were rearranging puzzle pieces of compositions into brand new puzzles, still recognizable, but reborn.

Each of the four democratically took turns starting out tunes, allowing for the individual’s personality and musical expression to set a tone and mood for each particular piece, Konitz, whose alto sax sound is wise, reedy, husky and evocative, took the first turn, starting out the evening with the classic, jazz tune, Solar. Pianist, Weber, began the second piece, abstractly, alone at the piano. This metamorphosised easily into What is this Thing Called Love, which was thoughtful and reflective and both stimulating and relaxing. The musicians went into abstraction again, which led into the great ballad, Body and Soul. It was an enjoyable journey, just floating along with the musicians and their musical road map. Bassist, Denson, led the next piece, drifting into Alone Together. Konitz sang a short, wordless vocal on this and the instruments flowed in and out, like a dream, and then grew more raucous, robust and swinging. Drummer, Ravitz, led the fourth tune, Stella by Starlight, starting with just the duo of piano and drums, emphasizing the cymbals. The sound was spare, pure and uncluttered and the group’s artistic creation had room to move and breathe. The song, What’s New? followed , dark, deep and moody. The quartet played a wonderfully original version of the often heard, Cherokee, as an encore and received a well-deserved standing ovation at the end of the concert.

The whole concert was played acoustically, which I was incredibly grateful for and allowed the music to be heard in its integrity, without amplification The atmosphere created was intimate and concentrated as the whole audience was seated very close to the stage and you could hear a pin drop as the audience was engaged in conscientious listening, along with the musicians, allowing for a complete sense of participation by all in the immediate experience of the evening. In a world where everything is amplified and we are daily bombarded by noise and distraction and competition to be heard over other loud noises, this acoustic concert was an oasis in a desert of chaos and a very special event. This was one of the best jazz concerts I’ve heard in a long time.