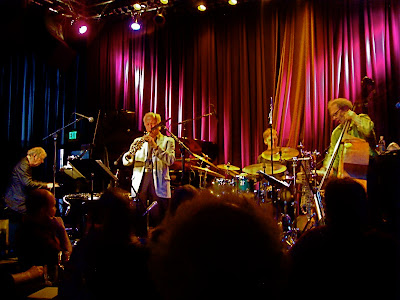 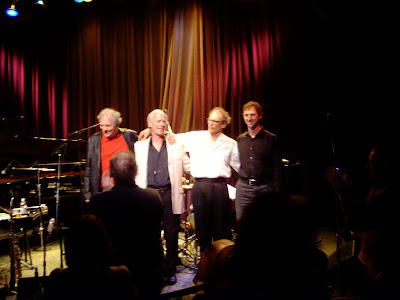 It is not an exaggeration to say that the group, Oregon, makes some of the most beautiful, sophisticated and intelligent music on the planet. Next year will be their fortieth year as a group and their musical interactions combine the best of years of playing together. Their blending of jazz and world music has given them their own unique and individual sound and their openness to creating spontaneous compositions keep their music fluid and fresh. They are both virtuosic as one organic unit while playing composed pieces and highly expansive, exploratory, creative, fearless, playful and completely relaxed with each other in their improvisations, leading in all kinds of wonderful, moody, evocative and unexpected directions.

Each member is an adept composer as well as an accomplished musician. Former Seattle resident, Ralph Towner, who now lives in Rome with his wife, an Italian actress, is a prolific composer and many of the performed pieces are his. They are lyrical, poetic and have lovely and uplifting melodies. Towner plays acoustic guitar, piano, keyboard synthesizer and a frame guitar synthesizer. He also plays French horn, though I haven’t seen him traveling with one in a long time. Paul McCandless is like no other oboist I’ve ever heard and has the facility to tackle difficult musical melodies with fluidity and grace, taking flight like a bird soaring through space. He contributing a great deal to the “chamber” sound of this jazz group, playing not only oboe, but also English Horn, bass clarinet, soprano and sopranino saxes, and a variety of penny whistles. Glen Moore plays acoustic double bass with assertiveness and humor. His wonderful, old bass, built in the 1700’s, with a lion’s head carving on top of the neck, has a rich, rare, full, seasoned sound, belying its age. Moore really explores the sounds and capabilities of the bass in his strong musical contributions. Mark Walker, the newest member of the group, now working with the other three for over ten years, offers colors, moods and a dynamic rhythm foundation on percussion and drums.

On their two evenings at Jazz Alley, they played many of their pieces from their latest CD, (dedicated to the memory of their thirty year long European tour manager), “1000 Kilometers”, including the haunting and evocative title piece, for which McCandless was nominated for a Grammy Award for Best Jazz Instrumental Solo and some older compositions, including the lovely, poetic and reflective “Green and Golden” and “Distant Hills” by Towner and a new piece, “In Stride”. Moore and Walker performed Moore’s bass/drums duet “Hoedown”. McCandless and Towner performed a new duet, “From a Dream” by Towner, which was literally heard in a dream that Towner had. The quartet totally improvised a piece each night, as is their custom, with satisfying musical results. One of these sounded to me like an epic journey from the peaks of the Andes to the heights of the Himalayas. Other pieces performed were the rhythmically complex, dramatic, “Deep Six” by Walker, which received a Grammy Award nomination for Best Instrumental Composition, “Yet to Be”, “Redial”, “Toledo” and one of my up-beat favorites, “The Glide”.

In celebration of their fortieth anniversary together in 2010, Oregon will record their twenty-sixth album together. Congratulations!

To learn more about Oregon, visit their website at: www.oregonband.com and hear some of their compositions at their My Space page at: www.myspace.com/thisisoregon.

For a schedule of upcoming events at Dimitriou’s Jazz Alley visit: www.jazzalley.com

Note Added January 22, 2010- Oregon will be performing at Birdland, in New York City, February 2 through 6, 2010. Visit www.birdlandjazz.com for more information.

Posted by www.artsandculturescene.com at 8:56 AM