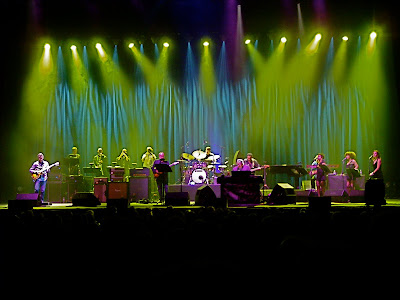 Steely Dan swept into Seattle, in a large, thirteen piece configuration, with a four part horn section and three back-up singers, for two eagerly awaited concerts this past week at the Paramount, featuring complete tracks from two different albums, Aja and The Royal Scam and then rounded out the second part of each show with some of their greatest hits from other albums. Fans were thrilled by songs they have been listening to and loving for as long sometimes as thirty-five years or more. It was mind-boggling as every single song that they played has been a major popular hit and my companion and I marveled at hearing one hit after another.

Donald Fagen and Walter Becker’s music remains timeless, defying classification into any time period or style. Their musicianship, compositions and arrangements are super-sophisticated, utilizing complex jazz chords and harmonies, hybridizing influences of jazz, rock, rhythm and blues, soul, funk and pop into their own, one of a kind sound. They are not afraid of using dissidence, adding to their uniqueness and unpredictability. They’ve always incorporated some of the best musicians around in their recordings, including Wayne Shorter, Michael McDonald, Larry Carlton, Joe Sample, Tom Scott, Lee Ritenour, Steve Gadd, Patti Austin, Michael Brecker, Randy Brecker, Victor Feldman, Ernie Watts and a host of many more, bringing even more excitement to their compositions.

The rhythms are powerful and infectious and it was almost impossible for me to contain myself in my seat at the two concerts. I wanted to get up and sing and dance joyfully along with the band!

Their lyrics are also intriguing and can be cynical and sardonic comments on society, culture, and human shortcomings; sometimes wild and cryptic and nonsequetorial, kind of like the musical world’s answer to Salvador Dali’s Surrealist painting: the meanings and images may not be clear, but when you put all the words together they make sense on a conscious or sub-conscious level. These dark, ironic, satirical, societal observations are juxtaposed with lively, adventurous melodies. I love singing their songs and sing their wild lyrics, as do others, full out, as if the themes of the songs have deep, significant personal meaning to me as an individual, no matter how cryptic. I think that this is particularly amusing.

Both nights at the Paramount were exciting and fun but I think that the first night, when the album “Aja” (1977) was played in its entirety, was the better of the two nights. I think that the “Aja” album is Steely Dan’s crowning glory. It won a Grammy Award, went Platinum and has sold over 5 million copies and was the band’s best selling album. In 2003, Rolling Stone magazine placed it at 145 of the 500 greatest albums of all time. I love every single song on the album, there is a lot of variety and more subtlety in the combination of songs. The songs on this album are probably familiar to people across the generations and are; “Black Cow”, “Aja”, “Deacon Blues”, “Peg”, “Home at Last”, “I Got the News” and “Josie”.

“The Royal Scam” (1976) performance featured the entire album, including; “Kid Charlemagne”, “The Caves of Altamira”, “Don’t Take Me Alive”, “Sign in Stranger”, “The Fez”, “Green Earrings”, “Haitian Divorce”, “Everything You Did” and “The Royal Scam”.

On both nights the three back-up vocalists swayed sensually and hypnotically, throughout the evening, in time with the music. The first night they wore festive and wonderfully glittery, sequined, black, cocktail mini-dresses. On the second night they went for a more demure look with simple black dresses. Their singing was beautiful and their women’s touch added a lot to the mix.

The band rounded out each evening with other popular hits from their long and illustrious career including some of my favorite tunes from the “Katy Lied” (1975) album; the economically prophetic, “Black Friday”, “Doctor Wu” and “Daddy Don’t Live in that New York City No More”, songs from the album, “Gaucho” (1980) including; “Babylon Sisters”, “Hey Nineteen”, “Gaucho” and “Time Out of Mind”, songs from “Countdown to Ecstasy” (1973); “Bodhisattva” and their concert finale number, the ever popular “My Old School” and numbers from their first album, “Can’t Buy a Thrill” (1972); “Dirty Work” and their encore piece both nights, “Reelin’ in the Years”.

The stage lighting was detailed and complex with lots of dramatic changes. I found the sound mix a little disappointing; a bit muddled and “soupy”, especially considering the kind of perfectionist fidelity and clarity on Steely Dan’s albums, all made before the advent of 21st century technology. I didn’t know whether to attribute it to the Paramount’s acoustics or the sound mixing. The instruments could have been more separated, especially the horns, which could have been more clear, forward and bright in their sound. However, the sound overall was fine enough to still enjoy this terrific and talented band of performers on these two memorable evenings.

Opening for Steely Dan with short sets each evening was Sam Yahel and his “Power Trio” of organ, electric bass and drums. I was thrilled and surprised to see Yahel as the opener. He is one of the great young organists and has performed and recorded with Joshua Redman and other jazz greats, internationally.

One up-coming theatrical event at the Paramount that I highly recommend that no one miss, is the Pulitzer Prize winning play and multiple Tony Award winner, “August: Osage County”, performed by the brilliant, Steppenwolf Theatre Company, of Chicago, playing October 27th through November 1st. It is one of the best plays I have ever seen in my life. To learn more visit: www.broadwayacrossamerica.com.

Posted by www.artsandculturescene.com at 8:06 AM