In conjunction with The Earshot Jazz Festival, 2017 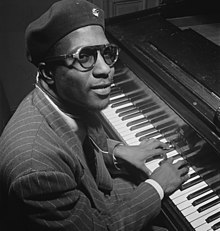 Twenty seventeen is the centennial anniversary of the birth of one of the most unique and innovative jazz pioneers, Thelonious Sphere Monk.

Celebrations are happening all over the world in homage to the great composer and piano maestro, considered the “Father of Modern Jazz”.

Several musical celebrations have taken place in Seattle, this month, including one by his son, drummer, T.S. Monk and his brilliant sextet at the Triple Door, on October 18, 2017.

T.S. Monk came out on the Triple Door stage and said “we are going to swing you” and that is exactly what the band did, from start to finish, with clean, crisp, no nonsense solos and tight, highly energized ensemble playing.

Compositions played at Triple Door included an original piece, "Sierra", written by T.S. Monk for his daughter; the compelling, waltz-like “Jean-Marie”, by late jazz pianist, Ronnie Mathews and Thelonious Monk’s compositions including “Think of One”, “Rhythm-a-Ning” and “Green Chimneys”.

During the evening’s performance, T.S. shared that “Round Midnight”, is the most recorded jazz composition recorded in the world, and that Monk is the second most recorded composer in jazz history, after Duke Ellington.

T.S. explained to the audience that his father was inspired to create some of his well-known compositions for his family members and friends, including “Crepuscule with Nellie” a love song for his wife, Nellie; “Little Rootie Tootie”, for T.S., who was affectionately known as “Toot”, for his boyhood love of toy trains; songs for T.S.’s late sister, Barbara, also a musician, “Boo Boo’s Birthday” and “Green Chimneys”; “Pannonica”, for his steadfast and supportive patroness and dear friend, the Baroness Pannonica de Koenigswarter, and “Skippy”, for his musical colleague, tenor saxophonist, Skippy Williams.

Early in his career, Monk’s distinctive piano style and compositions were not understood by critics, listeners and even some musicians:

"The 1945-1954 period was very difficult for Thelonious Monk. Because he left a lot of space in his rhythmic solos and had an unusual technique, many people thought that he was an inferior pianist. His compositions were so advanced that the lazier bebop players (although not Dizzy Gillespie and Charlie Parker) assumed that he was crazy. And Thelonious Monk's name, appearance (he liked funny hats), and personality (an occasionally uncommunicative introvert) helped to brand him as some kind of nut. Fortunately, Alfred Lion of Blue Note believed in him and recorded Monk extensively during 1947-1948 and 1951-1952. He also recorded for Prestige during 1952-1954, had a solo set for Vogue in 1954 during a visit to Paris, and appeared on a Verve date with Bird and Diz. But work was very sporadic during this era and Monk had to struggle to make ends meet.
His fortunes slowly began to improve. In 1955, he signed with Riverside and producer Orrin Keepnews persuaded him to record an album of Duke Ellington tunes and one of standards so his music would appear to be more accessible to the average jazz fan. In 1956 came the classic Brilliant Corners album, but it was the following year when the situation permanently changed. Monk was booked into the Five Spot for a long engagement and he used a quartet that featured tenor saxophonist John Coltrane. Finally, the critics and then the jazz public recognized Thelonious Monk's greatness during this important gig. The fact that he was unique was a disadvantage a few years earlier when all modern jazz pianists were expected to sound like Bud Powell (who was ironically a close friend), but by 1957 the jazz public was looking for a new approach. Suddenly, Monk was a celebrity and his status would not change for the remainder of his career.” -  Quote from Blue Note Records
Thelonious Monk was a musical genius, ahead of his time and since those early days, and the eventual discovery of his genius by the public, he was featured on the cover of Time Magazine, has his own U.S. postage stamp, was given a posthumous Pulitzer Prize, a Lifetime Achievement Grammy Award, has a star on the Hollywood Walk of Fame, a street in New York City named after him, numerous other awards and accolades and continues to be admired and revered for his dynamic, ground-breaking musical contributions by jazz listeners and musicians, thirty five years after his death.

T.S. Monk has some amazing stories about his father and growing up the son of a major jazz icon and innovator. As a child, many of the biggest titans of jazz came by the house often and he only knew them by their first names and nothing of their fame. He did not even realize his father’s prestigious place in the jazz world until he was in his teens.

He led a bit of a charmed life having been born into this family, with a father who was jazz royalty. He has a great story of when he was a young boy of fifteen and expressed to his father his desire to play the drums. His father picked up the phone and called drummer and fellow jazz icon, Art Blakey, who gifted T.S. with a set of drums. Then Monk called another jazz icon, drummer, Max Roach, who became T.S.’s personal drum teacher.

I’ve Included below a recent, anecdote filled video interview with T.S. Monk, by PIX 11, in which he shares this story and other historical stories about hanging out with his father at the long lived, Village Vanguard jazz club, jazz culture in New York City and experiences his father had in his life in the music world.

T. S. Monk told the Triple Door audience that he is actually the “third”. His father is actually “Jr.” His grandfather was the original Thelonious Monk, and T.S. has a son, who is Thelonious Monk the “fourth”, keeping this distinctive name alive through four generations.